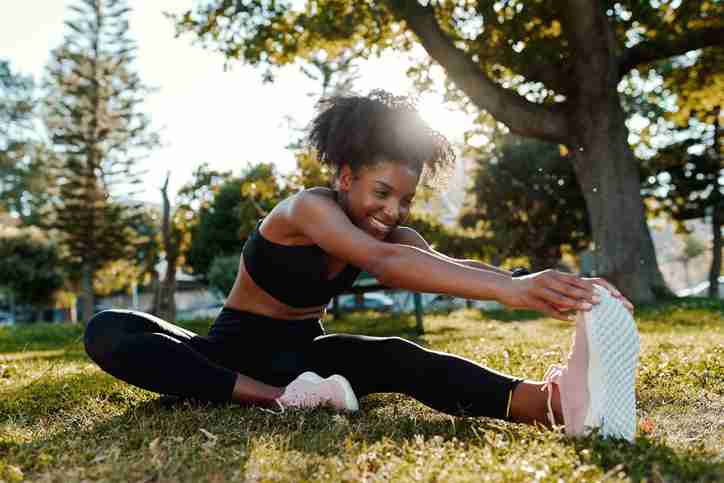 In The History of Physical Fitness Part One, we took you from the caveman to the European migration to the Americas. That was a lot of ground to cover in one blog post. But fasten up your seatbelts, because today we’ll be taking you on the rest of the journey.

In Part Two of our history class, we begin with our nation’s birth and take you to the current day, when help is just a click away with apps on your smart phone.

Our Fit Founding Fathers (and Mothers)

We all learned in grade school that our founding fathers were equipped with some of the sharpest minds of their generation -- arguably any generation. But what you may not have learned is how much they focused on physical fitness.

First off, George Washington was 6-foot-one and weighed 175 pounds. The dude was the original American Adonis.

Thomas Jefferson, author of our Declaration of Independence and the third president of the U.S., was also a fitness buff. To wit:

“Not less than two hours a day should be devoted to exercise, and the weather shall be little regarded. If the body is feeble, the mind will not be strong.”  – Thomas Jefferson

“The sovereign invigorator of the body is exercise, and of all the exercises walking is the best.” – Thomas Jefferson

Ben Franklin didn’t just fly kites. He was an avid swimmer. Sure, the portly Franklin had a reputation for overindulging in epicurean delights, but he also invented the swim fins and is in the International Swimming Hall of Fame. Really! (Kids: Don’t try to swim while holding a kite on a string during a lightning storm.)

Back in the Revolutionary Era, a fit militia was vital to American survival. Fencing, gymnastics, walking, running and swimming were among the most popular athletic pursuits.

It should be emphasized here that women also played a vital role in early American fitness. And no woman exemplifies this fact more than Catherine Beecher. The educator/activist devised fitness programs in the middle 1800s to meet the needs of women. She was founder of the Hartford Female Seminary, which was the first major U.S. educational program for women to include physical education courses as part of the curriculum. Beecher also created a system of calisthenics performed to music. Yes, Jane Fonda and Richard Simmons have Beecher to thank. 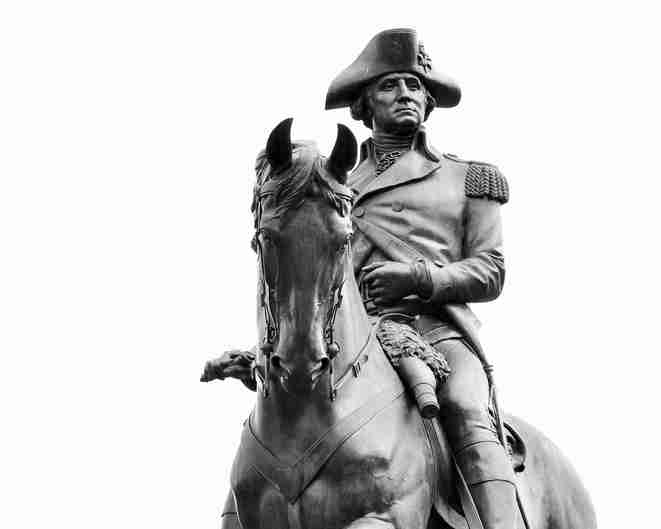 Baseball became all the rage during the Civil War and in the years that followed, as soldiers played together during wartime camps and then took the new sport home with them across the young nation. Newspapers and magazines spread the word of this game, and the Cincinnati Red Stockings led the way as the first pro team in 1869. Let’s be honest, they didn’t run hit like Mike Trout or run like Mookie Betts, but it was organized activity and may be considered a form of fitness to some.

It sure made a difference to Walt Whitman, one of the country’s most beloved authors. He especially liked what it did for spectators.

“I see great things in baseball,” Whitman said. “It's our game - the American game. It will take our people out-of-doors, fill them with oxygen, give them a larger physical stoicism. Tend to relieve us from being a nervous, dyspeptic set. Repair these losses, and be a blessing to us.”

The Industrial Revolution: The Fattening of America

After the Civil War and as America neared the turn of the century, technology and industry began to gain prominence. Farmers, who toiled in the soil, had no problem keeping fit. But while some people were playing baseball, more and more citizens were now working in factories, sweatshops and slaughterhouses. Forget about six-pack abs; increasing numbers of Americans were falling ill from cholera, typhus, tuberculous, smallpox and other potentially fatal maladies. Industry was literally killing us.

Some workers were replaced by machines. Other workers no longer were required to exert any physical strength. Things were looking pretty dire on the fitness front until . . . 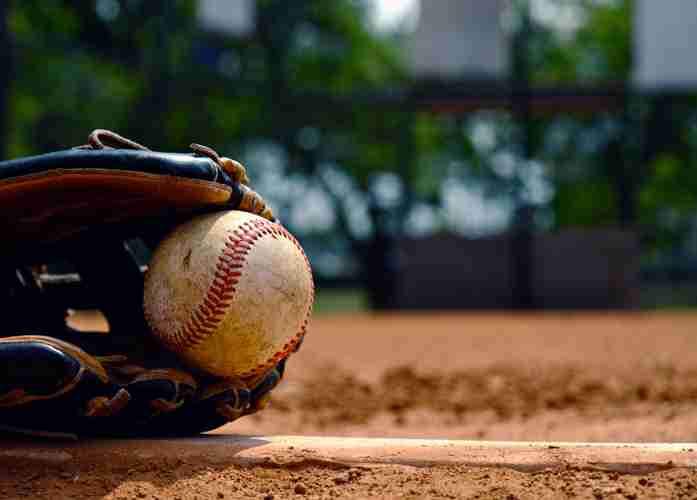 Teddy Roosevelt to the Rescue

Americans got jolted out of the doldrums by President Theodore Roosevelt, possibly the most physically fit president (for his times) ever, or at least until Barack Obama. Teddy saw the importance of exercise and encouraged all Americans to be physically active. The vibrant Roosevelt didn’t just proselytize; he did the work. He enjoyed boxing, climbing, hiking, rowing, tennis, swimming, weightlifting. He even practiced jiu-jitsu. And he inspired Americans to do the same. Bully!

Alas, his successor was William Howard Taft, who was 5-11 and round as a globe at a peak of 340 pounds. Hey, at least he invented the tradition of throwing out the first pitch!

The Roaring Twenties: We Get Lazy (Again)

Maybe it was too many people watching Taft trundling around. Just when America was on the path back to health, the First World War began and our men were sent overseas to fight. Many did not return. And many who returned were injured. But America was victorious in war and the nation was in a celebratory mood. We were too busy relaxing, living frivolously, eating, drinking. Oh, the debauchery! Exercising took a back seat to partying. 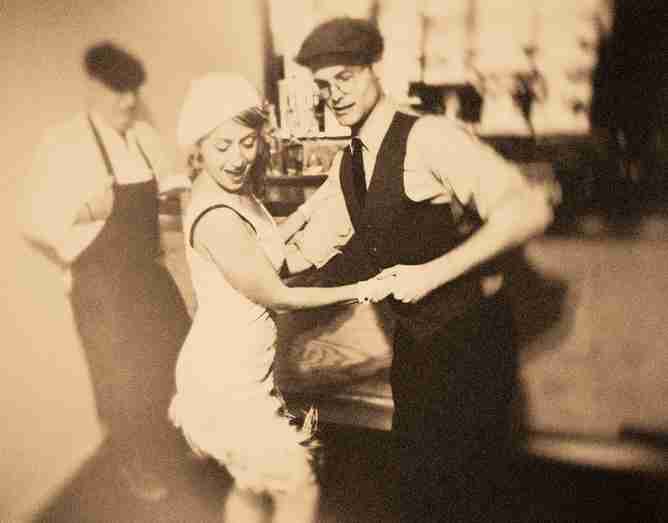 Great Depression and World War II had exhausted America. When the war was over, it was reported that about half of all Americans draftees were rejected or given non-combat duties because of inadequate physical fitness. Fitness levels in America had declined to new lows and now funding was scarce for health programs.

Things looked bleak. The fitness world needed a hero, someone who could inspire Americans to get off their butt. And that hero was a 5-foot, 6-inch San Franciscan wearing a stretchy jumpsuit.

In 1936, Jack LaLanne opened the doors to one of America’s first fitness gyms in Oakland, Calif. He did it all. He invented exercise machines. He was America’s first “fitness guru.” He wrote exercise books. He popularized exercise in the early days of television in the 1950s. He was, truly, America’s apostle of fitness.

In the 1950s, the Cold War was escalating and American households were expanding. We got lazy and sat in comfy chairs and watched something called TV. With TV trays for dinner. Oh, Lu-cy! In 1954, a test was conducted to measure the fitness of American children. Only 30 percent of the kids in the U.S. passed the test. In Europe, 91 percent of the kids passed. Talk about a wake-up call for fitness!

When John F. Kennedy became president in 1960, he spoke vehemently about the need for Americans to focus on their fitness level. Even before his inauguration, in December 1960, he authored a 2,000-word essay in Sports Illustrated entitled "The Soft American." In it, he warned “the harsh fact of the matter is that there is … an increasingly large number of young Americans who are neglecting their bodies—whose physical fitness is not what it should be—who are getting soft. And such softness on the part of individual citizens can help to strip and destroy the vitality of a nation.”

He was right. America was soft. And flabby. And Kennedy developed a program to improve the fitness of all Americans: the President’s Council on Physical Fitness. 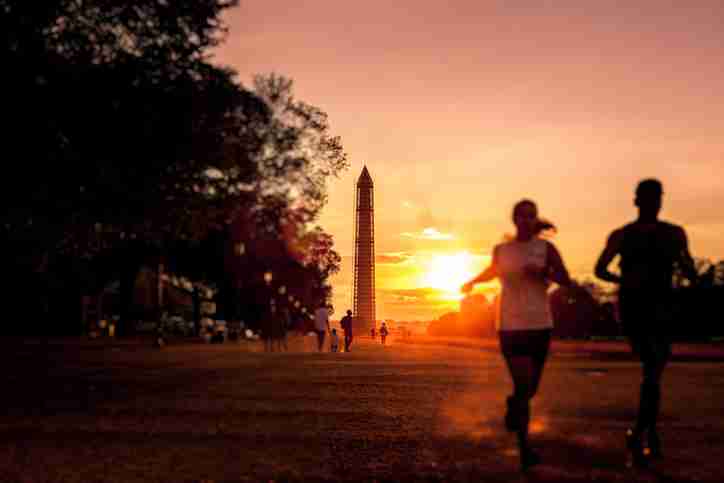 It’s difficult to pinpoint the birth of the running craze, but most experts say it began in 1963 in Oregon. William Bowerman published a small pamphlet simply titled “The Jogger’s Manual.”

It was only 250 pages, but it helped change the way Americas exercise. It literally defined “jogging”, the term often used then.

“With a short distance then increase as you improve. Jog until you are puffing, then walk until your breathing is normal again. Repeat until you have covered a mile or two, or three. Jogging . . . can be done ‘anywhere’ and by ‘anyone.’”

The pamphlet emphasized that all you needed was “wear a pair of comfortable shoes with thick, moderately soft soles.”

Bowerman would go on to use a waffle iron to design a running shoe in 1966. That shoe started a company you may have heard of: Nike. Founder Phil Knight wrote all about it in his brilliant memoir Shoe Dog.

By the 1970s, running (runners hate the term “jogging”) was huge. Organized races were held on weekends in nearly every decent-sized city in America. On April 14, 1968, the New York Times published a seven-page spread about the “fad,” concluding the story: “If the flower people (hippies) have discovered jogging, can the rest of civilization be far behind?”

On July 4, 1977, the cover of People Magazine featured Farah Fawcett and Lee Majors with the headline “Farah & Lee & Everybody’s Doing It. Stars Join The Jogging Craze.”

Running was great, but not for everybody. What about all those folks who wanted to get fit but just couldn’t buy into the running craze?

Soon, the popularity of Jazzercize and other aerobic classes skyrocketed across the nation. Americans actually stared at videos of aerobics dancers, making for classic TikTok reels today. 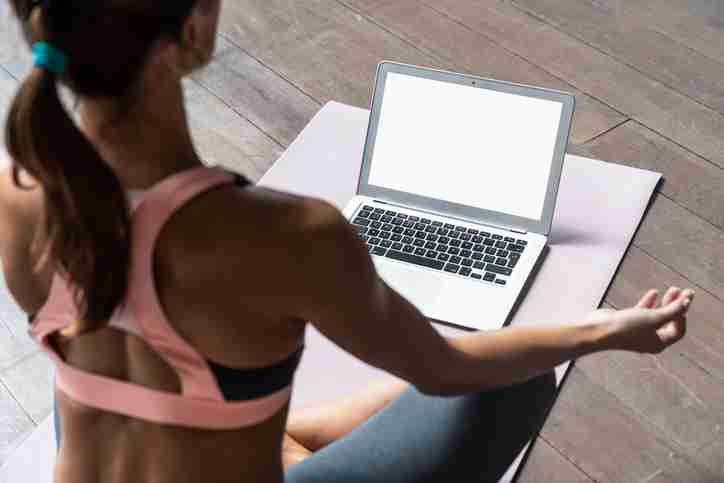 Following Fonda’s incredible success, others jumped into the game. During the 1980s and ’90s, you couldn’t watch TV – especially late-night programming – without seeing Richard Simmons dancing to the oldies or Billy Blanks teaching Tae Bo or Suzanne Somers showing off the ThighMaster.

You get the idea. Being a fitness guru was a growth industry in what will go down in history as The Spandex & Legwarmer Era.

There’s an App for That

Today, millions of us now look to our smartphone for physical fitness help. From Aaptiv to Zwift. Fitbit. Nike Training. MyFitness Pal. Strava. The list is endless.

Technology has “game-ified” health and made it easier for all of us to improve our bodies and minds. Technology has also helped us measure fitness and keep us focused on specific goals. We text friends and family to show them our Recovery number according to our fancy new Whoop activity tracker worn on our wrist around the clock. Imagine if Neanderthals could wear one of those while trying to keep up with their prey, or vice-versa.

As you can see, humans throughout history have struggled to stay committed to health. There is still a giant obesity problem in America, let’s face it. But in 2021, there is plenty of reason to get off the couch and move, and so many people around us leading the way. You got this!